This is the first in a (hopefully) series of posts co-written by me and fellow teenage author, R. A. H. Thacker, who can be found at Sunset Rising. This post can also be found at his blog.

No, we’re not talking about human sacrifice. Or maybe we are. But we’re actually talking about self-sacrifice–and not some suicidal tribal custom, either. More specifically, how to use it in fiction.

Why does sacrifice stir our hearts? Why does it affect us like nothing else? Because it is a reflection–a representation–of the greatest sacrifice, of Jesus Christ dying for his creation on a cruel cross on Calvary. 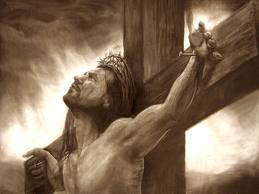 When should a sacrifice be used?

It depends on the specific case. If the story is about sacrifice–and the main character learns that he has to give himself up for others–then the climax will be a likely place for it to fit.

However, a story may not be about sacrifice, but sacrifice may still be part of it. In this case, it should be able to fit anywhere in the story–but it depends on the context.

A character could come to realize that he should be willing to sacrifice himself–not simply sacrificing others. As an example from one of my own novels, I (Robert) had a character come to a crossroads. He was a contestant in something like a bloodsport game. He was faced with a decision that had no turning back from–no second choice if he messed up. He could sacrifice himself for his friends–those he had come to know during the bloodsport–and in the process die himself. Or he could decide to let them be killed and go on himself. Out of love, he gave himself up. Both good and grief came from it, but ultimately it turned out to be the best decision for them all. If things had not turned out for good in his sacrifice, it would still have had no less meaning–life was the greatest thing he had. He had fought for it since he could walk. But then he had given up what he had coveted most for what he had found to be truly what was meaningful to him, his brethren around him.

Sacrifice doesn’t always have to result in death, although often it will. Self-sacrifice can be illustrated through characters just by patient service–being willing to die for something, or willing to live for it.

Therefore, I urge you, brothers and sisters, in view of God’s mercy, to offer your bodies as a living sacrifice, holy and pleasing to God—this is your true and proper worship.
-Romans 12:1 (NIV)

However, this doesn’t discount sacrifice to the point of death. Even to the extent of death, giving yourself up for God and devoting yourself to him is the greatest service possible.

Sacrifice is an expression of love–a great expression.

So should all of your characters be regularly sacrificing themselves? It depends on the character. Some characters will have sacrificial love flowing out of them even in the smallest of manners. But some won’t.

However, having an overabundance of sacrifices can make it lose its value somewhat. Especially in a contemporary story, you probably can’t just kill too many characters off. But living sacrifices–your characters being willing to die for something, even if they don’t die–can be common. We don’t inspire others to sacrifice by writing about characters who don’t do it themselves.

In the case of a death sacrifice, if the character who had sacrificed himself comes back, there must be a good reason, else it will mean nothing. The sacrifice needs to have consequences–needs to affect something–otherwise it seems like a worthless sacrifice, just a plot element that the author needed to have happen but didn’t want to actually kill the character.

In some books–allegories especially–there will be a Christ figure. Someone who sacrifices themselves for the world. For example, Aslan from the Chronicles of Narnia is a clear Christ figure–he is the son of the Emperor-over-the-sea, and came to Narnia to sacrifice himself, so that redemption might come to those who needed it. 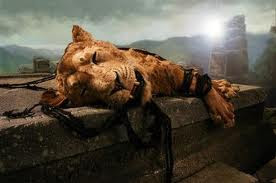 This is one of the highest privileges in this world–to be able to tell others of the sacrifice and resurrection of Jesus Christ. We need to make sure that we represent it clearly, so that people aren’t misled by our stories–fiction though they may be.

If you’re writing an allegory of Christ’s sacrifice and resurrection, make sure you check back to the Bible about what the core messages of Christ’s death are. It was out of love that Jesus gave himself up–not for his own sins. And he died that he might save all people.

In the case of a contemporary story, great sacrifices can still be made–even if not to death.

Then Jesus beholding him loved him, and said unto him, One thing thou lackest: go thy way, sell whatsoever thou hast, and give to the poor, and thou shalt have treasure in heaven: and come, take up the cross, and follow me.
-Mark 10:21 (KJV)

Wealth was the man’s greatest possession. He had lived a good life, obeyed all the commandments, but could not give but one final thing–his wealth. The greatest sacrifices lie in what matters most to someone. Your characters can sacrifice without having to die–and their sacrifice doesn’t have to be any less important for it.

We hope this helps for writing sacrifices in your own stories. Obviously, we can’t cover everything in one post. If you have any questions, feel free to post them, and we’ll do our best to answer.

~R. A. H. Thacker and Jag Swiftstorm
Posted by David Sampson at 4:00 pm

From a Jagged Inkwell Banner